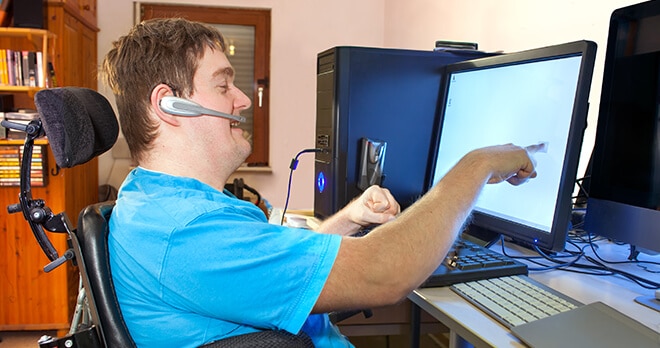 Today I read about the extraordinary life of Alan Martin, a dancer from Merseyside who was affected by cerebral palsy. If you’re more cultured than me, you may remember Alan from the 2006 cast of the BBC series of ‘I’m with Stupid’.

Alan spent his early life with no recognisable speech and incredibly limited communication, relying on facial expressions and gestures. He had very limited mobility and used a wheelchair and people treated him as though he had a learning disability.

At the age of 31 years old, Alan’s friends clubbed together to buy him his first communication aid and his life was transformed. In order to speak he used a portable computer, mounted to his wheelchair, and used a finger to select images, words and frequently used phrases to formulate his speech. Alan started his own company bringing dance to people who are differently-abled.

During his life Alan embraced technology – in order to express himself through dance, he used a specially designed wheelchair that could spin and tilt; and used computer programs to create music.

Sadly Alan died in 2013 at the age of 49, but he left a beautiful legacy behind as he continues to inspire people from all walks of life to reach their full potential in spite of the limitations of their bodies. He also demonstrated the transformative power of technology and has inspired me today to find out more about how technology is transforming the lives of people affected by cerebral palsy.

Technology for communicating with others

Communication is key to so many things we do in life, it forms the basis of our relationships; we communicate in everyday transactions; and we often need to communicate for work.

Many people affected by cerebral palsy have difficulties with communication and can benefit from technology to aid with it. I have been looking into some of the options currently available.

Electronic communication boards are like tablets with a choice of pictures, letters or words that a person can use to express themselves.

Whilst this seems like a good first step for learning to communicate, the fact that the device does not actually produce any recognised speech has obvious limitations.

I imagine the most famous user of a speech generating device is Stephen Hawking, with his characteristic flat and slightly monotonous tone. Although Hawking’s voice became part of his identity, speech-generating devices have come along way since the 1980s and a great deal of work is being done to produce voices that sound more like the voices of the adults and children they represent. It removes the strange disconnect of having a little girl, for example, with a voice like Hawking.

When a person is unable to use their fingers to select words or images on a communication board, eye-tracking devices can come into their own.

Eye-tracking technology follows where a person’s eyes are moving and looking so a word can be selected without having to touch a screen. This must be painstakingly slow to start with but I imagine you get pretty swift at it with practise.

As part of my quest to discover more about how technology is improving the lives of people with cerebral palsy, I came across a paper in the Journal of Engineering Design which describes how rehabilitation technology can accelerate skill acquisition and increase the functional abilities of children with cerebral palsy.

Cerebral palsy can often affect one or both of the upper limbs and Weightman’s paper explains how therapeutic arm exercises, based on useful movements such as reaching actions, have been shown to improve upper limb function.

Let’s face it though, it is sometimes hard to motivate a child to eat their breakfast let alone perform repetitive and boring arm exercises. This is where the genius of technology comes in.

Weightman and his colleagues set out to design a fun, interactive computer game, targeted at children with cerebral palsy between the ages of five and 12 years old.

In creating the technology, they engaged children in the design process, asking them whether they associated the appearance of the device with disability; whether the joystick was comfortable and whether the children enjoyed themselves.

The end result is a game that is both engaging and therapeutic and whilst some of the children identified areas where the game could be improved, this is an area of technology that is bound to advance rapidly.

Many people with cerebral palsy lack the fine motor skills required to use a regular keyboard or write with a pen; and technology has been developed to make typing and writing easier. Having recently acquired a hand tremor myself, this is something that I wanted to look into further.

Some writing technology is at the simpler end of the spectrum. This includes steadying devices that can be attached to a pen or pencil to help a person with shaky movements; or a pen that is weighted; or a desk that can be adjusted for height or angle can help someone optimise their position for writing.

At the more advanced end of the spectrum is speech recognition typing software than can be tuned into the user’s own voice or the voice generated from their speech generating device.

Cerebral palsy may affect a person’s ability to move around. Whilst some people with cerebral palsy are able to walk unaided, others are full time wheelchair users. Most of us are familiar with some mobility technology – the electric wheelchair for example. Adults and children who are unable to use their arms can now get around with the touch of a joystick or button.

One area of technology in the field of movement is functional electrical stimulation. This involves attaching a little device to a person which delivers electrical impulses to particular muscles and causes the muscle to contract.

In finding out more about this exciting area of tech, I came across a paper by Pool et al looking at how functional electrical stimulation is improving walking in children with spastic cerebral palsy.

Many people with spastic cerebral palsy have difficulties with foot clearance when walking. This paper explains how functional electrical stimulation applied to the muscles that pull the foot upwards (the ankle dorsiflexors) during the swing phase of a walk can enable children and adults with cerebral palsy to walk more easily.

As a lawyer representing children and young people affected by cerebral palsy, our work involves securing compensation when a child’s brain injury has been caused by substandard care around the time of their birth.

This compensation can be used to provide top of the range technology to maximise the quality of life for our clients and their families. We work with experts in different areas of technology who can assess a child and recommend the best possible devices for them. It is a real joy to see the lives of our clients transformed by technology.

If you have any questions about accessing assistive technology, perhaps through a claim for compensation, please contact our enquiries team to find out if we can help.

Guide to cerebral palsy – the condition, causes, and legal issues
Find out more about cerebral palsy, how it can be caused, and when you might have a claim for compensation. Opinion  |  04:11:21
“Severe brain injury, early neonatal death and intrapartum stillbirth associated with group B streptococcus infection” A review of the report from the Healthcare Safety Investigation Branch
The Healthcare Safety Investigation Branch (HSIB) periodically release reports into the risks and resulting issues that face maternity units, pregnant women and newborn babies when in NHS care. These are known as the Maternity National Learning reports. Opinion  |  06:10:21
Why I’m observing World Cerebral Palsy Day today
Today, like thousands of people across the world, I will be celebrating World Cerebral Palsy Day. World CP day is an opportunity to raise awareness of cerebral palsy; to celebrate the lives of the 17 million people affected by cerebral palsy; and to focus on areas for change that will have a positive impact on their lives.