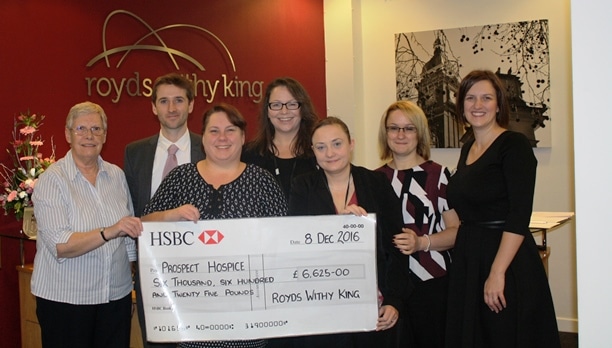 Private client lawyers at the Swindon and Marlborough offices of RWK Goodman have raised £6,625 for Prospect Hospice through the annual ‘Make a Will Month’ campaign.

RWK Goodman waived its usual fees for making and updating people’s Wills in exchange for a charitable donation to the hospice.

“We were delighted to play our part in this campaign and help raise over £6,500 in donations for such a fantastic charity and we would like to thank our clients for giving so generously,” said Mandy Casavant, an associate in the Private Client team at RWK Goodman in Swindon. “The one uniting factor in all the people I met during ‘Make a Will Month’ was that they had all been touched in some way by the work of Prospect Hospice. Prospect plays such a positive and valuable role in our community. People have been inspired to help in any way they can to support the hospice’s work.”

Corporate Social Responsibility is one of RWK Goodman's core values which the business is built on. Partners and staff throughout the firm are heavily involved in a wide range of charitable and community-led initiatives. The main beneficiary of the firm’s fund-raising in Wiltshire over the last 18 months has been Prospect Hospice as voted for by staff in RWK Goodman’s Swindon and Marlborough offices.

Since 1980, Prospect Hospice has provided the only dedicated end-of-life care service for the 300,000 people living in Swindon, Marlborough and north Wiltshire, as well as Fairford and Lechlade in Gloucestershire. They provide care, comfort and confidence around the clock every day of the year. They aim to bring more care for patients and practical and emotional support for their carers and family. Last year the Wroughton-based charity cared for and supported around 6,400 people in the area through its specialist end-of-life care and its services for families and carers. The charity also opened a new Outreach Centre at Savernake Hospital, bringing a broad range of its services closer to home for more people living in the rural communities living in and around Marlborough.