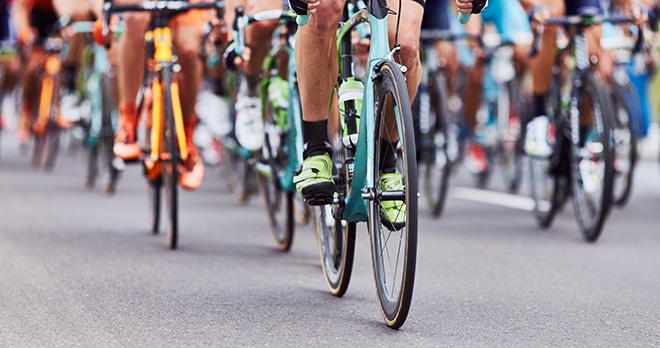 I’m very excited about working with the Iconic Cycling Events team as an ambassador to assist in planning sportives for 2019. By way of background research so that I can hit the ground running, I have been looking into whether day to day rules applicable to cyclists differ during sportives.

So, how does the law apply to cycling events? Well, exactly as you would expect it to apply in any other situation really. However, event organisers usually take precautions to protect riders and themselves should anything happen.

How do organisers work to protect themselves legally?

The most obvious difference is that it is often mandatory for participants to wear helmets during sportives. I think event organisers make this a condition of riding the sportive to ensure their insurance cover is not compromised.

Obviously, there is no legal obligation for cyclists to wear a helmet on a day to day basis. It is a matter of personal preference. Debating the rights and wrongs of making cycling helmets compulsory is its own blog topic, so if you’re interested in my thoughts on the subject, take a look at this feature in our magazine here.

It is also expected that event organisers will be comprehensively insured for their own protection as well as the protection of the public, who might be affected and suffer a loss of some description caused by the event.

Finally, organisers are usually at pains to explain that a sportive is not a race and results are displayed in alphabetical order (rather than in order of speed). This is all deliberate in order to avoid having the event re-categorised as a time trial or road race - to which additional obligations would be conferred upon the organisers.

How can organisers work to protect riders on the road?

In certain circumstances, organisers must give prior notice to the police and/or the local authority (especially/obviously if it is a closed road event), however in other circumstances i.e. traditional sportives, it is generally considered good practice to do so out of courtesy.

Clearly, when we ride at other times, there is no requirement to give prior notice to the authorities as we have every right to use the highway. However, on the day of a sportive there are generally a higher concentration of riders in certain areas because riders are following the same route or multiple similar routes. It makes sense for the authorities to be aware of this so that any additional precautions can be taken and clashes with other events can be avoided.

An interesting case I came across recently involved a high-level cyclist during a closed road event. The injured cyclist was (legitimately) cycling on the wrong side of the road when a tractor, travelling in the opposite direction, collided with him, knocking him off his bike.

Clearly, the cyclist had every right to expect the roads to be clear and the tractor shouldn’t have been there. The issue (still) to be resolved in that case is whether it is a matter for the farmer’s insurer to deal with or the insurers of the event organiser i.e. did the farmer ignore road closures and knowingly interfere with a closed road event, or were the measures taken by the organiser of the sportive inadequate in ensuring the safety of participants?

Furthermore, as part of the duty of care owed towards participants, sportives should be properly planned, risk assessed and the route should be ridden to check for anything else that might be relevant, such as the road surfaces, roadworks or the provision of other events which might make certain routes unsuitable at particular times of the year. An interesting tip I came across was to plan an anti-clockwise route to minimise right turns, as turning right across traffic is generally more hazardous than turning left.

I have been contacted by people injured having fallen off their bikes during sportives due to the presence of mud on the road near a farm or as a result of hedge cutting leaving debris in the road. On neither occasion would it have been appropriate to bring a claim against the event organisers but depending on how the event was planned, cyclists should be aware of their rights and the precautions that organisers should – and on the whole, do – take.

It’s important for event organisers not to rush or cut corners in arranging their events. In my experience, very few legal actions arise from sportives but that isn’t to say that riders should be slow in exploring their rights if they have an accident during an event.

I’ve acted for a few cyclists injured by cars during sportives. These cases didn’t throw up any new issues over and above those associated with most road traffic collisions. In these cases, perhaps the driver error in causing the collision was partly down to the frustration of perceiving delays to their journey due to a higher than normal volume of cyclists?

As with most of the injured cyclists I represent following road traffic collisions, their accidents could all have been avoided if the driver had kept a proper lookout and driven with more caution and respect for the cyclists.

Injured at a cycling event?

If you want to find out more about making a claim for compensation following an accident at a cycling event, please contact our specialist team. Opinion  |  25:02:21
Whiplash reforms: legislating for insurers’ empty promises?
Rachel Jones looks at the whiplash reforms and asks: are insurers delivering on the reduced premiums they promised as a result of this legislation? Opinion  |  16:12:19
Thousands of drink drivers are reoffending – what does this mean for claimants?
As the festive season approaches, awareness of the risks of drink driving come to the forefront of our minds, not least due to an increase in adverts highlighting how, if we drink and drive, we may end up arrested, injured or possibly even dead. Fortunately, the majority of us do think twice about how we intend to travel home after meeting friends or loved ones for a drink or two. Opinion  |  06:03:19
Are drones the answer to the UK’s pothole problem?
Drones can be used for filming, as a delivery method, and even to replace fireworks - but could they solve the pothole problem on our roads? Our Personal Injury team takes a look. Opinion  |  13:02:19
The Automated and Electric Vehicles Act 2018 – six months on, is it fit for purpose?
We are now six months on from the introduction of the new statutory liability for driverless vehicles. Here, Rachel Jones gives a reminder of the Act’s key components, and an update on how technology is marching on. Opinion  |  08:01:19
Smart motorways – are they really as smart as they claim to be?
How safe would you feel stranded in a broken down vehicle, or attending an emergency, on a motorway with no hard shoulder?

Opinion  |  16:11:18
Driverless cars are a game-changer. Is the law keeping pace?
As someone who uses their car on a daily basis, the thought of owning a driverless car is really exciting. They may seem like a futuristic concept but the introduction of these cars to our roads will soon be a reality. Opinion  |  23:10:18
Good news for cyclists – “vulnerable” road users will be exempt from changes to the law governing personal injury claims
Mark Hambleton gives you an update on the exemptions relating to the impending Civil Liability Bill. It’s better news for cyclists than when the Bill was first announced.